Our "Soon-to-be-ours" House in Brigham City

Posted by Grammyzanne at 1:51 AM 5 comments:

Two weeks ago on October 16th I was sustained as Stake Home Storage Specialist.  Last Sunday I was set apart as Stake Home Storage Specialist.  Today, after serving just over 2 years, I was released as Leon Valley Ward Relief Society President. I really thought I'd be mostly relieved - and a weight was lifted from my shoulders.  But I have grown to appreciate the sisters in our ward and there is some sadness in leaving that relationship.  My first councilor was called as the new Relief Society President. She was an excellent counselor and will be an excellent president and the sisters are in good hands.

My new calling will really be a new calling as I've never served in this capacity before. (My history has been to "recycle" callings - Relief Society president, Nursery leader, Cub Scouting, Stake Primary Presidency most notably.) I'm looking forward to "learning my duty" and seeing what encouragement I can give in helping the people in our stake increase their self-reliance. I intend to make use of Kathy's expertise - thanks in advance Kathy. Time for this old dog to learn new tricks.
Posted by Grammyzanne at 11:49 PM 1 comment:

Uncle Jack "in a neutral country"

I spent much of the evening reading selections from Home from Siberia: the Secret Odysseys of Interned American Airmen in World War II by Otis Hays, Jr. Uncle Jack was one of those internees.  Uncle Jack was part of the Navy's Fleet Air Wing Four in the VB-136 Squadron.  The VB-136 Squadron was one of four that rotated in and out of Casco Field on Attu, one of the furthermost Aleutian Islands.  Lieutenant (jg) Jack Ralston Cowles flew the PV-1 Ventura.  His crew consisted of Ensign Leonardo Panella (copilot), Ensign Millard B. Parker (navigator), ARM 1st Class Harold R. Toney (radioman), and AOM 3rd Class John R. McDonald (top turret gunner).

On August 20, 1944, after straffing enemy ships in the Paramushiro Strait, the antiaircraft fire they encountered disabled their plane, forcing a landing on the coastline in Kamchatka. The plane split upon landing and burst into flames but the crew were able to escape without serious injury except Ensign Panella who suffered bad burns on his right hand and arm and minor burns on his face.  As they walked towards the beach they were met by three Soviets.  Their leader gave Lt. Cowles a bear hug and then took the crew to a military base at Petropavlovsk. The Navy Squadron VB-136 commander, Charles Wayne wrote letters to the next of kin of Lt. Cowles's crew that they were missing in action.


The crew's arrival in Petropavlovsk began an almost 7 month internment (Soviets were trying to maintain neutrality with the Japanese) filled with bedbugs, cold, disillusionment, boredom and illness.  On September 12, 1944 they along with two other crews were flown to Magadan.  On September 14 they were flown to Chita, then Irkutsk, then Novosibirsk and finally Tashkent.  Each stop usually involved layovers of up to a couple of days due to weather.  The 17 arriving Americans were met by 45 other Americans at the Tashkent Internment Camp.
The Soviets didn't want to anger the United States but wanted to maintain their neutrality with Japan.  It took much planning to engineer the Americans escape into Iran.  Uncle Jack was a member of the third group of five groups to "escape" into Iran. Just as everything was in place for the group to "escape" and the first portion begun on December 5, 1944  in progress, a couple of articles appeared in US papers indicating that the Soviets had facilitated the escape of an earlier group of internees. The Soviets, concerned how Japan might react, on December 8th sidelined the railroad cars the men were in and after a three days sent them back to Tashkent. Finally on January 25, 1945 they began the train ride again, and this time successfully arrived at Camp Amirabad in Tehran on January 30, 1945 having spent the last 48 hours in cargo trucks. They were deloused, instructed to take showers, their clothes destroyed (a few men who had hidden their diary notes in their clothes managed to save them), given a plain army uniform, and fed. In many ways they still felt like prisoners; for the next five weeks they were separated, for secrecy's sake, from the rest of the troops until they reached the United States. The men were taken by plane from Tehran to Abadan to Cairo. On February 2, 1945 they were trucked to an army rest camp on the Gulf of Suez. On February 10th they flew from Cairo to Naples where they boarded the Sullivan on February 11th. The 130 returning men had the run of the ship. They sailed to Oran, Algeria where they were joined by 35 other ships.  The voyage across the Atlantic was fairly monotonous but not without incident. A submarine apparently attacked one of the tankers and remained in the area for about a day. A storm and a high-riding Sullivan contributed to seasickness and suspected food poisoning didn't help either. On March 6, 1945 the Sullivan docked at Brooklyn Port of Embarkation. Security officers boarded the ship before the men were allowed to disembark to remind them they were obligated not to disclose they had been interned in and escaped from the Soviet Union.  The Army airmen were sent to Fort Hamilton and the Navy airmen  to Floyd Bennett Field in New York.  There any souvenirs or clothing that indicated they had been in the Soviet Union were confiscated until the war was over.  Some received their impounded property years later; others didn't.
Upon repatriation the men were required to sign oaths of secrecy and could not share their experiences: "I was in a neutral country" was the only permissible response. It has taken a long time for the story of these 291 men to come to light.  Some of the official government documents weren't declassified until 1986.  Some of the men interviewed for the book in 1987 were hesitant to discuss their experience until they had received clearance from the Department of Air Force to discuss their war-time experiences.
Now I understand why Uncle Jack would never discuss his war time experiences and redirected the conversation to his real estate adventures.
Posted by Grammyzanne at 1:44 AM 2 comments:

BJ asked for some pictures of the British Isles for a school project.  Since I'm so indecisive about what to include and what not to include decided to post them on a Picassa web album so he could down load what he wants.  I've labeled most of them, though they are not in chronological order - long explanation I will spare you.
If you are interested is seeing what Mother and I saw Five years ago (has it really been that long!) here is the link
https://picasaweb.google.com/109981134823798906409/BritishIsles1?authkey=Gv1sRgCMeWypP2j5nYlQE#

A glimpse of what is in the album. Really wish I had the time and money to make a proper scrapbook of our adventure.  It was wonderful!  Thanks Mother!

Posted by Grammyzanne at 5:25 PM 3 comments:

Still on the stand

No picture.
No poem.

Bishop Rod Davis after serving 6+ years was released as the Leon Valley Ward bishop today. Marvin Weatherholtz (1st counselor) and Richard (2nd Counselor) were also released.  Brad Winter was sustained as bishop with Richard as 1st Counselor and Scott Fulmer as 2nd Counselor.  We also sustained a new Executive Secretary (previous one having completed a portion of his medical training is moving).

Because of the 18 moves from our ward that are occurring in May and June (they have completed another rung on their life's ladder) the Elder's Quorum Presidency and High Priests Group were also reorganized today.

There are many more holes to fill.

Those that are moving have greatly blessed our ward and we will miss them.  Their future wards will be blessed.
Posted by Grammyzanne at 9:54 PM 3 comments:

One of the things I like about Spring (besides all the flowers) is that it is so full of promises and hopes of new beginnings. 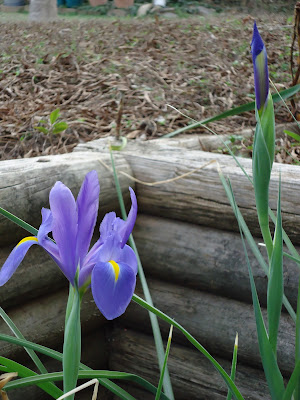 Here are some of the first "spring promises" in our yard. 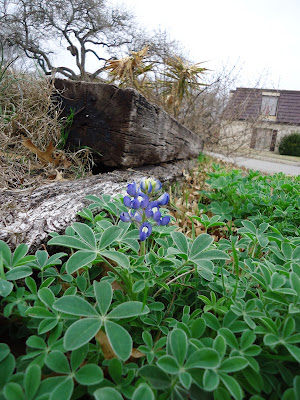 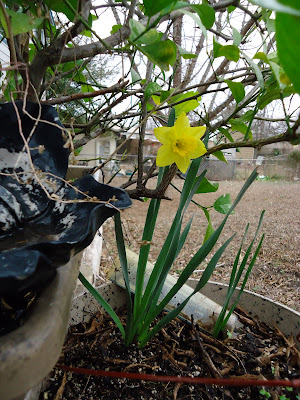 The pictures were taken about a week ago and Spring really has sprung now.
Posted by Grammyzanne at 8:02 AM 4 comments: 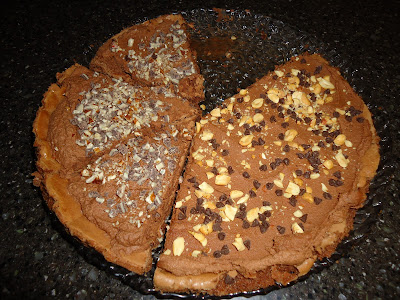 It is a well-recognized fact that I like chocolate - and usually the darker the better. We've known that I come from a long line of chocolate lovers on my mother's side(Grandma Bessie Harmon plotting to get some chocolates by moaning on the couch "chocolates" about the time her dad was to be home). And I have passed the chocolate lover genes on (barely a toddler, BJ snatched a Bluebird chocolate out of his dad's mouth just as Dad was about to put it in his mouth).  I'm a little slow but, just recently I realized the Cowles line also has a thing for chocolate - else why would "Grandma Cowles' Brownies" be such a treasure?
One of my Christmas presents was a cookbook, "Chocolate Never Faileth."  It is fun to read (delightful quips and chocolate information) AND has mouth-watering recipes.  When I came across Chocolate Pizza I had to give it a try for our "I Read the Book of Mormon in 2010" Pizza Party.
Armed with the recipe for the crust (kinda a blend of  sugar cookies and brownies) and suggestions for "sauce" and toppings, I let my imagination and taste buds soar.  On the right is a chocolate peanut butter pizza. - chocolate peanut butter frosting topped with chopped peanuts and mini chocolate chips.  On the left is an Andes Mint pizza - Whipped Chocolate Ganache with chopped Andes mints and chopped pecans.
On a roll, I made more for our Visiting Teaching Conference.  Used the two above except omitted the cocoa from the peanut butter frosting. Also tried a Heath Bits pizza (chocolate cream cheese frosting with Heath bits, and mini chocolate chips) and I think my favorite, Rocky Road pizza (Whipped chocolate Ganache with chopped peanuts, mini marshmallows, and mini chocolate chips.  All four pizzas were glazed with a chocolate drizzle.
Twas Chocolate Lovers Heaven.
Posted by Grammyzanne at 10:02 AM 7 comments: